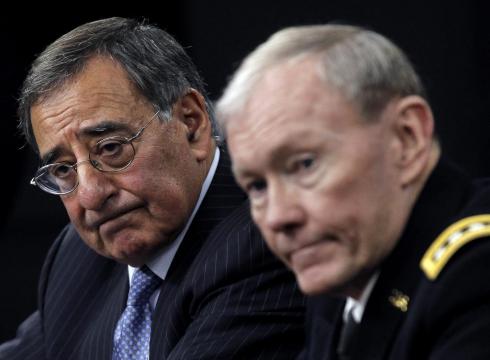 U.S. Ground Forces Would Shrink By 100,000: Pentagon leaders outlined a plan Thursday for absorbing $487 billion in defense cuts over the coming decade by shrinking U.S. ground forces, slowing the purchase of a next-generation stealth fighter and retiring older planes and ships.

In a bid to pre-empt election-year Republican criticism, Defense Secretary Leon Panetta said the plan shifts the Pentagon’s focus from the wars in Iraq and Afghanistan to future challenges in Asia, the Mideast and in cyberspace. More special operations forces like the Navy SEALs who killed Osama bin Laden will be available around the world, he said.

“We believe this is a balanced and complete package,” Panetta told a news conference, with Army Gen. Martin Dempsey, chairman of the Joint Chiefs of Staff, at his side.

Some lawmakers were quick to dispute him.

“Taking us back to a pre-9/11 military force structure places our country in grave danger,” said Sen. John Cornyn, R-Texas, a member of the Senate Armed Services Committee that will hold hearings on the Pentagon budget plan. Continue Reading…