Chip Kelly Ends His First NFL Fling For Now: Chip Kelly does everything else fast, so it probably shouldn’t come as any surprise that it took him just a few hours to make up his mind on serious overtures from the NFL. But on the heels of late-breaking headlines Sunday night confirming his pending exit from Oregon, it turns out even college football’s most celebrated leadfoot is susceptible to a bout of cold feet. From The Register-Guard:

University of Oregon football coach Chip Kelly told a highly placed UO source late Sunday night that he has reversed course and decided to turn down an offer from the NFL’s Tampa Bay Buccaneers.

Kelly told one assistant coach Sunday night that he had been offered the Tampa Bay job, but Kelly told him he wasn’t certain what he would do. Continue Reading… 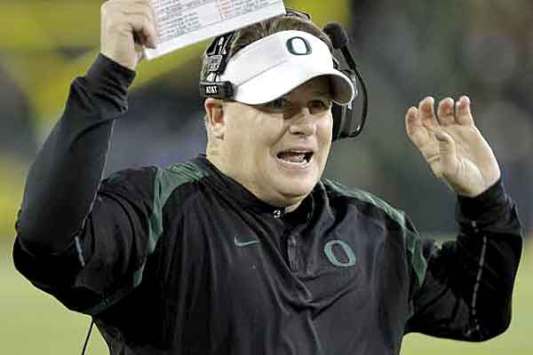 Kelly met with the Buccaneers last week, and both sides are hopeful an agreement can be reached within the next 24 to 48 hours, the Tampa Bay Times reported.

Kelly has been Oregon’s head coach for three years, winning the Pac-12 or Pac-10 Conference title in all three and reaching three Bowl Championship Series games.

Kelly, 48, would make the jump to the NFL if a financial agreement can be reached, a source told KGW in Portland on Sunday night.

Kelly is the first known candidate whom the Buccaneers have interviewed from the college ranks. Known as an offensive innovator, the Buccaneers are hopeful he could bring some of his up-tempo schemes to the NFL. Continue Reading…