The idea was simple — but groundbreaking: Create a live showcase for black music, modeled on “American Bandstand.”

Don Cornelius pulled $400 from his own pocket to launch the dance show on a local Chicago TV station in 1970. As host and executive producer of “Soul Train,” he was soon at the throttle of a nationally syndicated television institution that was the first dance show to cater to the musical tastes of black teenagers and also helped bring black music, dance, fashion and style to mainstream America.

In the process of presenting the soul, funk and R&B of the day, the Afro-haired, dapper Mr. Cornelius became a TV icon, his sonorous baritone welcoming viewers to “the hippest trip in America.”
Mr. Cornelius, 75, was pronounced dead at Cedars-Sinai Medical Center in Los Angeles on Wednesday after a family member found him in his home with a gunshot wound to his head, according to law enforcement sources. The wound appeared to be self-inflicted, but the death was being investigated by police and the coroner’s office. Continue Reading…

Demi Moore 911 Call Actress Convulsing Smoked Something: The newly released 911 call placed from Demi Moore’s home on Monday night reveals that the 49-year-old actress was smoking something and was “convulsing,” “semi conscious,” and “burning up” before help arrived.

The heavily redacted tape reveals mass confusion at Moore’s household on Monday night. “Sir, this is an emergency,” a female caller says, before giving the dispatcher Moore’s Beverly Hills address. She becomes increasingly panicked, saying, “We need an ambulance here as soon as possible, please.”

“She smoked something, it’s not marijuana, but it’s similar to … it’s similar to incense and she seems to be having convulsions of some sort,” the woman says, who identifies herself as a “friend” of the actress. She also says that Moore had been taking some “other stuff” recently but didn’t know what it was and mentions that Moore has been having “issues.”

Another woman tells the dispatcher that Moore is “burning up” and not breathing regularly but is able to squeeze her hand. At the end of the call, a man takes the phone to give the dispatcher directions to Moore’s home and says that she’s calmed down. “Now she’s breathing fine and she’s not convulsing,” he says.

On Thursday, Moore reportedly returned home from the hospital. Multiple reports have stated that Moore’s hospitalization was prompted by a seizure she suffered after inhaling nitrus oxide. Her rep has thus far declined to comment beyond her Tuesday statement that Moore is seeking treatment for stress and exhaustion.  Continue Reading…

Demi Moore Hospitalized After Inhaling Whip-its Full Of Nitrous Oxide: Demi Moore was doing “whip-its” — a type of nitrous oxide inhalant — before she was rushed to the hospital earlier this week, TMZ reported.

The troubled actress became semi-conscious and had symptoms of a seizure after inhaling a dangerous amount of nitrous oxide — a gas typically inhaled by young people looking for a cheap high — a friend told paramedics who attended the scene, the gossip site reported.

The 49 year old was rushed to the hospital from her home in Los Angeles late Monday night, before checking into a treatment facility Tuesday to reportedly seek treatment for substance abuse.

Her rep said that she was seeking “professional assistance to treat her exhaustion and improve her overall health.”

However friends of the star said she went to rehab because she is “emotionally and physically exhausted” over her painful split with Ashton Kutcher, who is “acting like a teenage boy,” the New York Post reported.

One friend told the newspaper that Kutcher, 33, who was spotted partying with Brazilian supermodels Monday at Sao Paulo fashion week, continues to flirt with women while still calling his ex “when he is at a low moment.”

“Demi was talking to Kobe Bryant at a CAA Golden Globes party, and Ashton came over and made a scene,” the source told the newspaper. “He made jealous comments to Kobe, then Ashton went to the bar and was openly flirting with other women.” Continue Reading… 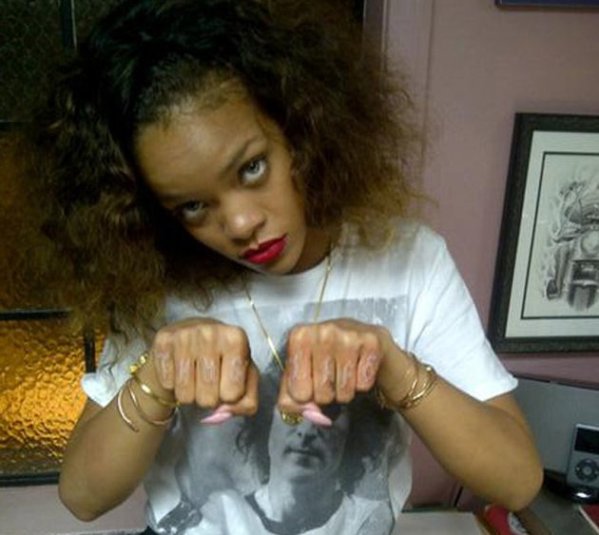 Rihanna Thug Life Tattoo: Rihanna’s gone through some tough times in the recent past, but I wonder what message she’s trying to send with her new tattoo if any. As you can see, she’s inked her fingers with the words “Thug Life,” a term coined and popularized by rapper Tupac Shakur who died in 1996 and had the same phrase tatted across his stomach. Rihanna’s tattoo is light pink and is very faint, which seems almost contradictory.

My immediate thought was that the tattoo is fake, but according to TMZ she was seen at a tattoo parlor in LA yesterday; and the assumption is that’s when she got it. However, Rihanna also shared a photo of her getting a tattoo on her lower back.

Rihanna seems to be a huge fan of tattoos considering she has well over ten of them visible all throughout her body. She also seems to have a strong friendship with her celebrity tattoo artist Mark Mahoney, who’s also done work on Angelina Jolie.

The website did not cite named sources, but said that the actress, who split up with husband Ashton Kutcher in November, will “seek further professional assistance” for the substance abuse. Continue Reading…